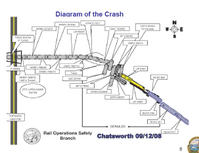 Metrolink Lawyer Train Accident Safety Alert:   "Blame the train engineer" has been a favorite response by the train industry and the NTSB over the last 20 years when train accidents cause property damage, personal injury and death.  The truth is that the train industry, as a result of prior accidents and litigation, has known for decades that it is impossible for train operators to be attentive all the time.  Train operator fatigue, sleep-apnea, medication, reduced visibility, distractions have cause almost all of the train collisions involving death or injury.  The real question our accident lawyers are asking as a result of the Metrolink train accident is what the commuter train industry in California has done to reduce accidents?  The unfortunate answer is that the train industry, including Metrolink lawyers and executives, have done almost nothing, despite attempts by the NTSB and Congress to take the act of avoiding train crashes out of the hands of engineers. Read more about what our lawyers who are investigating the Metrolink train crash in California have discovered ......

Metrolink Train Accident Investigation Update: What Caused The Accident & Who is Responsible

Our mass tort lawyers continue to investigate the various contributing factors and responsible parties for the Metrolink train accident outside Los Angeles in Chatsworth, California. The train was being operated by employees of Veolia Transportation and crashed after the engineer failed to stop at a flashing red signal and crashed into an oncoming Union Pacific engine.  26 people were killed as a result of the train crash, including the Metrolink engineer. Over 100 people were injured, many seriously. Traverse Legal's goal, like the victims and their families whose lives have been changed forever, is to make sure that changes are made so that a train accident like this never occurs again. Metrolink and Veolia Transportation's failures led the deadliest train accident in the last several decades.  Metrolink, Veolia Transportation and other parties potentially contributing to this accident need to be held accountable. Potential claimants should note that there may be a six (6) month statute of liability for claims against Metrolink (and perhaps Veolia) under California Law.  This means a claim should (and possibly 'must') be filed within six months of the date of accident.

Traverse Legal's metrolink lawyers are exploring the following possible theories of liability against Metrolink, Veolia Transportation and others ...

LOS ANGELES / CHATSWORTH, CALIFORNIA: Traverse Legal's attorneys continue to explore possible causes for the Metrolink train accident outside Los Angeles, California on September 12, 2008.  Lawyers looking into the matter are focusing on the allegation that the train operator, who was an employee of the company operating the commuter train system for Metrolink, Veolia Transportation, was using his cell phone at or near the time of the crash.  The Associated Press has now reported that California is now considering an emergency ban precluding train operators from using cell phones through California’s top rail safety regulation authority.

LOS ANGELES / Chatsworth, California: Our attorneys are looking into allegations that a dispatcher tried to warn the engineer of a California commuter train that he was about to collide with a freight train but the call came too late. The Metrolink commuter train crash has killed at least 25 people thus far, and is the deadliest rail disaster in 15 years. 135 were injured in the train crash.

Veolia Transportation: What role did the operation company play in the Los Angeles California train accident?

LOS ANGELES / CHATSWORTH, CALIFORNIA:  Metrolink train crash - Veolia transportation hired the engineer who caused the Metrolink train accident.  Veolia Transportation also operated the commuter train system for Metrolink.  As such, they have primary liability for negligence in this horrific train accident which caused untold injuries and at least 25 deaths.  If you were injured in this accident or have a loved one who was killed, you should contact an attorney immediately to understand your rights. California law requires a claim to be filed against Metrolink within six months of the train accident.

LOS ANGELES / CHATSWORTH, CALIFORNIA:  This appears to be a matter of clear negligence by the Metrolink engineer operating the train.

The collision occurred after the Metrolink passenger train's engineer failed to obey a red stop signal that indicated it was not safe to proceed into the single track section. The dispatcher's computer at a remote control center in Pomona did not display a warning prior to the accident according to the National Transportation Safety Board (NTSB).  Metrolink reported that the dispatcher tried in vain to contact the train crew to warn them, but the NTSB contradicted this report, saying the dispatcher noticed a problem after the accident.

Both trains were moving toward each other at the time of the collision. At least one passenger on the Metrolink train reported seeing the freight train just moments before impact, coming around the curve. The conductor of the passenger train, who was in the rear car and was injured in the accident, estimated that his train was traveling at 40 miles per hour before it suddenly came to a dead stop after the collision. The NTSB reported that it was travelling at 42 mph. The freight was traveling at approximately the same speed after its engineer triggered the emergency air brake only two seconds before impact, while the Metrolink engineer never applied the brakes on his train.