Arizona Tour Bus Crash: Lawyers Investigate Cause of the Crash 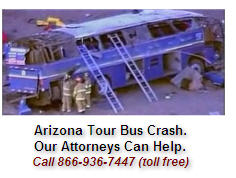 Arizona Bus Crash Deaths and Injuries Were Avoidable: The Bus Industry Has Resisted the Addition of Seat Belts for Years

Do you want to know why there were no seat belts on the bus in Arizona filled with Chinese nationals on vacation near Hoover Dam?  Ask the American Bus Association (ABA), which represents approximately 1000 motorcoach and tour companies in the United States and Canada.  On behalf of motorcoach operators, tour operator and the travel industry, the ABA has consistently opposed mandatory seat belts on motorcoaches and buses for years.  In this ABA position paper on motorcoach occupant crash protection, the ABA vigorously opposed the National Highway Safety Administration (NHTSA) association’s attempts to regulate safety standards for buses by requiring seat belts.  Incredibly, the ABA stated: “that motor vehicle safety standard FMVSS 208, concerning occupant crash protection and seat belts, should not apply to buses without further and independent testing.”

Contact A Bus Accident Attorney To Understand Your Legal Rights

Incredibly, in the minutes of the BISC Vehicle Technical Operations Committee date January 11-12, 2009, the committee argued against the requirement of retrofitting older buses with seat belts and suggested that the bus and motorcoach industry should fight hard for the government to include regulatory language to the effect that “a plaintiff cannot bring a case against a coach operator or coach manufacturer for not installing seat belts in a coach that was built to FMCA standards in place at the time of the manufacture.”  Essentially, what they’re asking for is immunity from litigation for failure to put seat belts in buses based on negligence in product defect theories.  Even though the bus industry has known for decades that a lack of seat belts would lead to a higher incident of passenger ejection on collision and result in severe injury and death, they want immunity from litigation for the failure to act on this knowledge.

In an August 18, 2008 article posted on the ABA website, the following NHTSA studies are noted:

In a July 15 presentation to the Bus Industry Safety Council—a coalition of safety experts and engineers sponsored by the ABA—NHTSA said it had been testing buses with various seat belts (no belts, lap only and lap and shoulder belts), and testing buses for roof strength, fire safety protection, and emergency evacuation. In that report, NHTSA described its observations with and without seat belts in crash tests at 30 mph into a fixed rigid barrier. With unbelted dummies, NHTSA said, the heads typically contacted the seatback in front of them; in aisle seats, the dummies tended to end up in the aisle; and in window seats the dummies ended up in the row in front or on the floor. Not surprisingly, belted dummies fared better: While their heads and knees were more likely to contact the seatback in front, the dummies stayed in their seats. The agency is now conducting sled tests to measure seat and belt anchorage loads for the various restraints and to examine restraint effectiveness, according to the report.

Where does Congress stand on the several bills regarding occupant protection? Pantuso: We have spent years meeting with DOT on issues associated with occupant protection, insisting it conduct the studies we have requested for more than a decade. Now finally we are seeing the process move forward, and it will not be too far into 2009 before we start to see proposed regulations and legislation that addresses more than just the question of seatbelts.

Ironically, 2009 may be the year where buses are finally subjected to meaningful regulation concerning seat belts, seat backs, side windows and overall crash worthiness.  Also, ironically, recently testified in September 2008 before the United States Senate, acknowledging that seat belts in rollover crashes are critical:

For example, seat belts may help passengers in so-called “roll over” crashes but in other type of crashes a combination of compartmentalization and other safety improvements may be just as effective.

The industry has also known that the larger bus side windows are a major contributing factor to deaths and severe collisions because of the size of the window openings.  As the American Bus Association has done for many years, Mr. Pantuso continued to argue that more testing was required before bus crash worthiness and passenger safety are regulated by NHTSA.  This is a favorite of vehicle manufacturers and their lobbyist.  By continuing to push “more testing” they are able to avoid the regulations which are so desperately needed.  Ask the families of the seven Chinese passengers killed in the Arizona bus crash whether or not seat belts should be required.  They don’t need “further testing” to know that their loved ones were killed as a direct result of the industries refusal to incorporate the most basic safety elements in their buses such as seat belts.

If you are looking for other information concerning the American Bus Associations long commentary about the need for seat belts in tour buses and motorcoaches, you can see the results of a Google Search for “seat belts” on their website.

The fatal tour bus accident which claimed the lives of seven Chinese tourists traveling back from the Grand Canyon to Las Vegas Nevada is now concluding its third day of investigation.  Yet, more questions remain as the National Transportation Safety Board and local law enforcement officials continue to withhold key information about the bus crash.  Our attorneys continue to investigate the following key issues which family members of the victims struggle with as well:

Our lawyers continue to monitor and investigate the Arizona tour bus accident for answers to these and other questions. If you have any information about these issues, you may post a comment here.

BEIJING, Feb. 1 (Xinhua) -- China's Foreign Ministry has demanded that the U.S. embassy to China facilitate travel for the families of those killed and injured in Friday's tour bus crash near the Hoover Dam in Arizona.The ministry confirmed that six Chinese nationals died and nine were injured, including one from Hong Kong although the names of those who were killed has not been released.


Investigators are looking into the cause of the deadly tour bus crash on U.S. Highway 93 about 27 miles south of the Hoover Dam but no cause has yet to be identified. It may take weeks to determine if the vehicle overturned as a result of driver error, a defect in a bus component or other cause of the crash which killed seven passengers and injured 10 others.   The  National Transportation Safety Board (NTSB) was helping to investigate the cause of Friday’s crash.