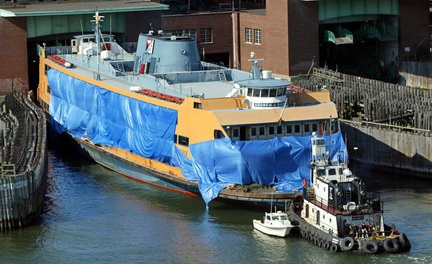 36 people were injured on Saturday, May 8, 2010 when the Andrew J. Barberi slammed into a pier on Staten Island. Our cruise ship attorneys are investigating this Staten Island ferry boat accident.

The orange 310-foot New York ferry boat, the Andrew J. Barberi, has been involved in at least three major incidents since it began sailing in 1981. The first occurrence took place during its initial voyage when the engine and a steering mechanism failed causing the ferry to run aground near Governors Island. In 2003, the captain of the Barberi, suffering from fatigue and the influence of pain killers, caused a second incident by negligently driving the ferry into a pier at St. George’s Terminal on Staten Island. This second incident resulted in 11 deaths and serious injuries to 42 people.(Michael M. Grynbaum and Patrick McGeehan, 5/8/10, http://www.nytimes.com/2010/05/09/nyregion/09barberi.html?src=mv)

The most recent incident occurred on Saturday, May 8, 2010 at about 9:25 a.m., when the Barberi was on approach to the St. George Ferry Terminal at normal speeds of about 5 mph. The assistant captain was unable to slow the ferry’s approach and it is likely that the mechanism in charge of slowing the ferry failed, causing it to slam into a pier. Under normal conditions, the Barberi would approach the pier at about 5 mph then slow by putting the propulsion system in reverse. Apparently unable to slow the ferry’s approach, the captain sounded an alarm about one minute before the collision after he had been unable to slow the ferry down using the apparently faulty propulsion system.

Traverse Legal's cruise ship attorneys represented the largest number of Crown Princess passengers in the 2007 listing accident. We have already begun investigation of the most recent Andrew J. Barberi incident.  If you have been injured on a cruise ship, contact a cruise ship accident attorney or call 866.936.7447.

More information on the New York Ferry Boat Accident:
US Coast Guard spokeswoman Barbara Miller reported that at the time of the most recent incident, the Barberi was carrying 252 passengers and 18 crew members.

A news release from the Staten Island Department of Transportation stated that the Saturday incident resulted in 36 people being transported to local hospitals though most with only minor injuries.

New York 1 video footage of the Barberi incident, rescue workers at the scene of the accident carrying people away on stretchers
http://www.ny1.com/7-brooklyn-news-content/118354/ntsb--no-criminality-in-s-i--ferry-crash

The damage to the ferry was examined by New York Fire Department Deputy Chief Bill Tanzosh who stated that the impact left two breaches in the hull about 17 feet above the water line. One measured about 4 feet by 6 feet and the other was 4 feet by 4 feet. http://www.cnn.com/2010/US/05/08/new.york.ferry.crash/index.html

The Barberi crew responded appropriately
Unlike the 2003 incident that killed 11 people and which was brought on by the negligence of the captain, the most recent incident involving the Barberi and 36 injured people does not appear to be caused by inappropriate conduct of the crew. http://www.ny1.com/7-brooklyn-news-content/118339/officials--ferry-crew-responded-appropriately

The assistant captain was at the wheel in control of the ferry during the crash
At the time of the impact the captain was on the hull of the Barberi and in his stead on the wheel and in control of the ferry was the assistant captain. However, this appears to be proper conduct; the National Transportation Safety Board declared that the crew of the Barberi ‘acted properly’ after initial interviews with the crew after Saturday’s incident. http://www.ny1.com/7-brooklyn-news-content/118354/ntsb--no-criminality-in-s-i--ferry-crash

Who is to blame
With improper conduct on part of the crew largely ruled out, the Staten Island Department of Transportation said that the May 8, 2010 incident is likely the result of a mechanical failure. The National Transportation Safety Board plans to spend a week collecting evidence and then, focusing on both the navigation and propulsion systems and the ferry’s maintenance and inspection records, will spend up to a year and a half to determine the cause of the accident.

The Barberi uses a propulsion system known as the Voith Schneider Propeller which is highly maneuverable and resembles a circle of knives that hang straight down in the water. According to several officials and former employees familiar with the operation of the Staten Island Ferry, the Barberi’s propulsion system is a “sophisticated contraption that is considered expensive to maintain and was not installed on more recent ferries bought by the city.” The Voith propeller is normally particularly agile but in spite of the increased maneuverability of the Voith design, the three new ferries which began service for the city in 2005 all employ more a more conventional propulsion system. http://www.nytimes.com/2010/05/09/nyregion/09barberi.html?src=mv

The ‘second’ Barberi incident (2003)
An extremely fatigued captain under influence of pain killers rammed the Barberi into the St. George Terminal at Staten Island, resulted in 11 deaths and 42 seriously injured.

In Agni v. Wenshall (In re City of New York), 522 F.3d 279 (2d Cir. N.Y. 2008), a three member panel for the US Court of Appeals for the 2nd circuit upheld a federal court ruling that the city could not limit its liability in the 2003 Staten Island Ferry crash. The federal court’s ruling was upheld because the city “did not act with reasonable care” by letting a single pilot operate the ferry without at least one other person nearby to help in case of emergency. The court found further that the city was not allowed to limit its liability through an 1851 Act which limited a boat owner’s liability to the value of the boat minus repair costs. This finding was justified by the court because the city had failed to enforce its own rule which required a minimum of two pilots present in the pilot house “at all times while the ferry was underway.” (Bernie Augustine, March 27, 2008 “Staten Island Real-Time News”, http://www.silive.com/news/index.ssf/2008/03/city_cannot_limit_its_liablity.html)

It seems like New York Staten Island Ferry has a bad luck maybe since it has been involved in at least three major incidents. This is not a good thing. The owner must have to study the boat.

Accident is everywhere. I hope that the ones who have made the faults will be penalized.

36 people were injured
that was the disaster actually ..