Metrolink Attorney Train Accident:  L.A. Times Interview: Metrolink Top Spokesperson Suddenly Steps Down After Deadly Crash - The video of  former Metrolink spokeswoman, Denise Tyrrell, establishes that she did, if fact, have authority from Metrolink to admit 'human error' as a key factor causing the Metrolink train crash outside Los Angeles, California just north of the Chatsworth train station. The full transcript is found in the extended post. 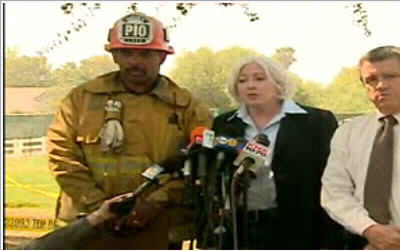 Denise Tyrrell
We must acknowledge that it was a Metrolink engineer that made the error that caused yesterday’s accident.

Announcer
This was former Metrolink spokeswoman, Denise Tyrrell, on Saturday.

Denise Tyrrell
When two trains are in the same place at the same time, somebody has made an awful mistake.

Announcer
Straightforward, not holding back, clearly caught up in the moment.

Denise Tyrrell
I’m a little too emotional at this moment to take a big flurry of questions from the press.  I simply want to put this out there for the public, who have had their trust in us.

Announcer
Following these statements, the Metrolink Board of Directors, along with the NTSB, felt that Tyrrell was premature in speaking out, but she says Metrolink CEO David Solow gave her the okay.  Denise Tyrrell told the LA Times “He told me to go ahead.”  I felt that when my reputation was called into question in the national media, there was no going back as far as I was concerned.”  This morning, after 7 years on the job, she surprisingly resigned, saying “I felt the damage to my reputation is so great, I could not work for these people anymore.”  To gain insight on what goes through the mind of a PR person during a crisis situation, we went to Dennis Wilcott, Vice President of Publication Relations of America.

Dennis Wilcott
I think Denise certainly got the clearance from her boss and was instructed to make a statement that these are the facts that we know them at the time, so she clearly had the authority to speak

Announcer
In direct response to the resignation, Tyrrell says “I believe that David Solow’s decision to allow us to go public without waiting for the NTSB to point the finger was a brave and honorable thing to do.  We have a basic difference here that can’t be resolved.  I see no way I can represent them and maintain my own standards.”

Tyrrell says that she was on a conference call with the Metrolink Board when she first learned that they were disappointed with her public comments.  To read more about the phone call that led to her resignation, pick up a copy of tomorrow’s LA Times.  It’s in there.

Reporting from the News Center tonight, Marco Gonzalez.  Back to you.

Let's see if Metrolink later denies responsibility or liability. Or, worse yet, finds another reason which deflects Veloia employee's negligence.

I respect any company that steps up and takes responsibility when they are at fault. I think the Metrolink Board made a big mistake in failing to stand behind Tyrrel.