Here’s what the UDRP Panel’s reply was; 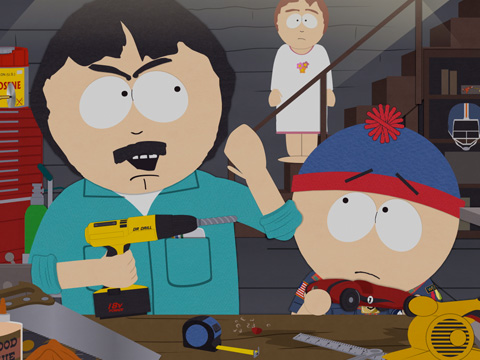 "The UDRP was designed to deal with the problem of cybersquatting. This problem arises when a party registers a domain name which consists of or contains the trademark of another, or some form confusingly similar thereto, which would lead a user to believe that if the user were to enter the domain name in a browser, the user would be taken to a web site which was sponsored by or affiliated with the trademark owner. The UDRP was designed to prevent such a registrant from profiting from the Internet users confusion. While Complainant may well have legitimate concerns regarding the conduct of Respondent and the content displayed on Respondent’s web site, the UDRP is not the vehicle to address such concerns. Nothing could be clearer than an examination of the first prong of the three part burden of proof which must be met by a complainant."

Although Stan and his Dad, Randy, are popular characters on South Park, ‘Stan’ or ‘Stans Dad’ were not the copyrights asserted by Viacom in its UDRP challenge.

The ‘first prong’ of the three part test required to be fulfilled by any successful UDRP complainant requires that the domain name being challenged is confusingly similar to the complainant’s copyright.

In addressing this ‘first prong’ the UDRP Panel noted that there was no reasonable grounds for stating that the domain name is confusingly similar to Viacom’s ‘South Park’ copyright and the Panel went on to state that;

"The domain name at issue is clearly not confusingly similar to any trademarks or service marks asserted by Complainant. stansdad.com is not remotely similar to SOUTH PARK. An Internet user who enters “www.stansdad.com” in his / her browser may have a myriad of destinations in his or her mind that are totally unrelated to Complainant’s television show. The domain name at issue does not incorporate Complainant’s mark or a semblance of Complainant’s SOUTH PARK mark. The Panel does not exclude the possibility of Complainant perhaps being able to succeed in some future proceeding if it was for example able to show rights in a mark such as STAN’S DAD. It has not done so here. Complainant’s principle concerns are not it seems with the particular domain name, but are with what is occurring on Respondent’s web site. While the Panel acknowledges that Complainant’s concerns may be legitimate and perhaps entitled to legal redress, the UDRP is not the vehicle to provide such redress. The issues of possible copyright infringement and other possible concerns are far beyond that which the simple procedure established in the UDRP was designed to redress."

More on this story can be found here;