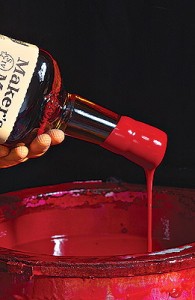 The order was entered by U.S. District Judge John G. Heyburn II in the form of an injunction effectively preventing any rival of Maker’s Mark from using a dripping wax seal on tequilas it sells in the United States.

The Kentucky Associated Press commented on the unique Maker’s Mark sea which was secured through a trademark registration with the USPTOl;

“The dripping red wax seal on a bottle of Maker’s Mark bourbon is not only distinctive, it is now the exclusive legal property of the company that makes it.”

A brief history of the parties and trademarks involved;

Maker’s Mark was registered as a trademark in 1958. At the time of registration, the USPTO made note that the distinctive Maker's Mark wax seal serves only a decorative purpose.

Maker’s Mark sued over the seal and their registered trademark in 2003, claiming it violated the longstanding Maker’s Mark trademark. In 1997, the Mexico based Casa Cuervo brand began to use a dripping wax seal on bottles of its Reserva Tequila in an attempt to create its own distinctive artisan look.  Cuervo ceased use of the dripping wax seal five years ago.

“The court considers the red dripping wax seal inherently distinctive, because it is a unique mark used in an unusual way to draw in the consumer.”

In his ruling, Judge Heyburn clearly noted that competing companies are barred from using the distinctive Maker's Mark wax seal trademark. However, Maker's Mark was unable to recover damages from Casa Cuervo in this trademark registration lawsuit.

More on the story can be found here;

Posted at 11:07 AM in i. Trademark Infringement Lawsuits | Permalink