Stealing Whitney's Houston's legacy web traffic:  Cybersquatting is when you register someones trademark, company name, brand or personal name withe the bad faith intent to profit from their mark or fame. Many cybersquatters register typographical variations of the persons trademark or name in order to take advantage of the people who mistype the domain name when entering it into the browser address bar.  As a celebrity gets more popular, their web traffic goes up, as does traffic on the typo-domains. One of the true tragedies is that these illegal domain names are most profitable when someone famous dies and a spike in their web site Internet traffic brings big increases in revenue.  Check our some of these cybersquatted domains on www.whitneyhouston.com and Whitney Houston's celebrity status.  Not unlike many agents, talent agencies and recording companies, Sony Records appears to have done little to protect Whitney Houston from cybersquatters: 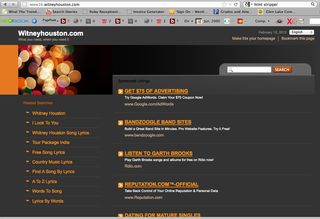 Domain name disputes come in various forms.  A stolen domain name is one thing.  Cybersquatting a celebrity domain name never seems as nefarious as when that celebrity dies.  RIP Whitney Houston.  Your legacy lives in many forms, but nowhere as permanent as the internet and world wide web.

Posted at 10:08 AM in g. Trademark Typosquatting Under Anti-Cybersquatting Act | Permalink | Comments (0) | TrackBack (0)

Despite Facebook’s cybersquatting lawsuit effort, the typo domain Facebopok.com sold for $1,999 on SnapNames.com, according to TheDomains.com.

Facebopok.com forwards to f-questionnaire.com, which is clearly a counterfeit site using the same colors, font and facebook logo in order to deceive consumers.

Just because a registrar allows you to register a domain name, or you are able to pick a domain name up on the aftermarket, doesn’t mean it isn’t domain theft.

In their recently released study, the domain name strategy consultancy FairWinds Partners reported that the companies owning the 250 most trafficked Websites are losing over 448 million impressions and $327 million a year through domains that are typos of the top 250 Websites.

In celebration of theDetroit Tigers playing in Minnesota tonight for the Central Division Championship, we thought it appropriate to take a look at who might be cybersquatting / typo-squatting the teams and players in tonights match up. Without further fanfare ...  (Results by Domaintools.com)

A common concern among trademark holders has finally hit the mainstream press this week.  Wired reports that Harvard University Business School professor Ben Edelman, one of the giants of the academic study of Internet architecture, has released a report stating that Google profits extensively from its use of pay-per-click ads on parked and typosquatted domain names.

Posted at 10:35 AM in g. Trademark Typosquatting Under Anti-Cybersquatting Act | Permalink | Comments (0) | TrackBack (0)

Of course Google profits from millions of typo-squatting websites from Google's Adsense advertising program. But are they liable for trademark infringement or contributory trademark infringement? The  Lawyers in the Vulcan Golf, LLC v. Google Inc. class action lawsuit alleging the Google Adsense for Domains (AFD) program is assisting in violating trademarks are about to find out. A hearing on is scheduled for as early as next month in which Plaintiffs' attorneys will ask an Illinois federal judge to allow the case against Google to proceed.

Posted at 09:07 AM in g. Trademark Typosquatting Under Anti-Cybersquatting Act | Permalink | Comments (1) | TrackBack (0)

Companies and political organizations should put more effort into registering mis-typed versions of their primary domain, not only to protect visitors to their Web sites but also to prevent e-mails from accidentally leaking out, a security researcher said on Wednesday.

As part of his investigation, Friedrichs registered 124 domains consisting of common misspellings of the primary domains of candidates in the U.S. presidential election. In a strictly controlled experiment, Friedrichs used a mail server to count the number of e-mail messages sent to the misspelled domains, finding 1,121 connection attempts from 12 distinct IP addresses in a 24-hour period. Friedrichs stressed that he did not look at the e-mails and bounced the messages back to the sender to let them know they had misspelled the address.

"It is not clear what is going on here," Friedrichs told attendees. "But if someone sends an e-mail to that company, and makes a typo, the owner of the (fraudulent) domain is going to get the information."

Typosquatting has generally been considered more of a nuisance than a security threat. In 2003, VeriSign caused a stir when it started redirecting queries for nonexistent domain names, likely due to misspellings, to a page controlled by the company. Frausters frequently use domain names that have spellings close to that of a major brand to fool potential victims into believing that the fake site is legitimate.

Posted at 10:28 AM in g. Trademark Typosquatting Under Anti-Cybersquatting Act | Permalink | Comments (2) | TrackBack (0)