Is Your Domain Name Worth Protecting?

Sedo, the leading online market place for buying and selling Internet domain names and websites, has reported that a total of $72,230,731 worth of domains were sold and transferred via the Sedo marketplace in 2007.  This is a 60% increase of the same figure from 2006.  Now are you still thinking about leaving that domain unprotected? 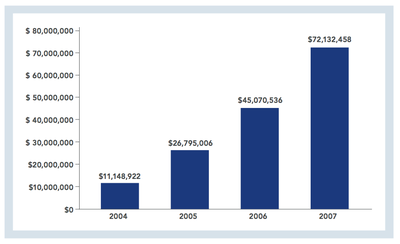 Read about the latest domain auction as reported in the New York Times here:

Investors are so confident in the growth of online advertising — and the ability of domainers to capitalize on that trend — that they plan to soon start selling shares of domain-name companies to the public, even in today’s volatile market. Last September, NameMedia, a company based in Waltham, Mass., which has a huge portfolio of generic domain names, filed to go public on the Nasdaq stock market.

The industry’s transition to respect and professionalism may not be entirely complete. One strategy that has cast a stigma over the industry is called typo-squatting — registering domain names with variations and misspellings of major brand names, in the hopes that Web users will inadvertently stumble upon the sites. It has not gone away.

In the last few months, Yahoo, Dell, BMW and Microsoft have all sued small domain registrars and domainers, asserting that they are profiting from thousands of names similar to their trademarks. The cases are pending.

Another questionable tactic is known as domain tasting. Domainers register Web addresses in bulk and, during a five-day trial period, test how ads do on those sites. They then let go of the unprofitable ones and get a full refund. Google and an organization called Icann, the nonprofit group that oversees the domain name system, have recently announced plans to combat the practice.

Domain hijacking is another strategy. Susan Kawaguchi, global domain name manager at eBay, said during a DomainFest session on domain strategies for corporations that her company spent a lot of time “trying to make sure someone doesn’t steal ebay.com.”

Mr. Morse of Oak Hill Capital said the business was “in its teenage years.” He added: “It is mature in many ways, but there are pockets of it that are still juvenile.”

Isn't it time you spoke to a domain name attorney who specializes in e-commerce law, trademark registration and domain protection matters?

I think many businesses don't understand the web and don't protect their domains because they are not aware of the theft, cyber-squatting and typo-squatting problems.

Like most business decisions, a domain name owner must make decisions based upon potential return on investment. These figures are clear evidence that domain names are some of the most valuable assets for a company and/or individual. Invest the proper money in domain name protection and realize the true returns that clearly available in the marketplace. A domain name attorney is a good first investment, and likely the one needed to not only protect the domain name, but also facilitate the domain name sale.

Advertise.com sells for $900 k via afternic.