Announcer: Welcome to Copyright Law Radio sponsored by Traverse Copyright Law, internet lawyers specializing in copyright infringement, copyright licensing and copyright registration. Now, here’s your host, Damien Allen.
Damien Allen: Good afternoon, and welcome to Copyright Right Law Radio. My name is Damien Allen. Today we are discussing the Shepard Fairey et. al. v. The Associated Press case. Once again, there have been a couple of new developments since the last show we did on this and joining us via the telephone is Jo-Na Williams. Jo-Na is a fourth year law student at Suffolk University Law School in Boston, Massachusetts. She’s also a member of the American Bar Association’s IP Committee 304 and author of The New Symbol of “Hope” for Fair Use:  Shepard Fairey v. The Associated Press article from the September/October issue of Landslide magazine. Good afternoon, Jo-Na, and welcome to the program.
Jo-Na Williams: Good afternoon, thank you. It’s really great to be here. 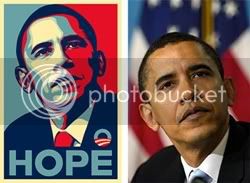 Posted by Enrico Schaefer at 02:33 PM in e. Copyright Fair Use Defense | Permalink