Throughout the past several years, many online companies have made changes to their Terms of Use, Terms of Service, and Privacy Policy.  Some do so on their own initiative, only to be rebuked by users and forced to make additional changes.  Others respond to user input and make changes based upon it.  Pinterest, a social media site that allows users to organize and share things from other websites, is overhauling its terms.  In particular, Pinterest is revising its website terms and conditions.  The Pinterest Terms relate to ownership of content, use of content, intellectual property rights associated with that content, among other things.  Pinterest also appears to be taking an interest in providing an opportunity to be notified in the event of a copyright complaint or trademark complaint by offering online forms for copyright and trademark owners to utilize.  It remains to be seen how Internet users will reach to these new terms and conditions, but most likely this is not the first and will not be the last changes.  All companies are well-served to regularly revisit their website terms and conditions to ensure they are accurate and relevant to the current business model.  Moreover, as changes in the law occur, updates may be necessary or recommended.  As always, an internet lawyer can help when it comes to website agreements.

Recently over at the ABAJournal, Martha Neil, in an article entitled, ‘AMA Takes Page from ABA Playbook, Sues FTC Over Red Flags Rule’, noted that;

The AMA filed a lawsuit today contending that health care organizations should not be included among businesses such as banks, credit card issuers and mortgage lenders required by the Federal Trade Commission's so-called Red Flags Rule to adopt new measures to protect customers from identity theft.

The AMA is seeking declaratory and injunctive relief and attorney's fees against the FTC for what its complaint describes as ‘an arbitrary and capricious exercise of FTC power’.

The FTC mandates compliance with its newly promulgated Red Flag Rule by June 1, 2010

Financial institutions and creditors are now required to implement identity theft prevention programs to identify, detect, and respond to patterns, practices, or specific activities that could indicate identity theft. The FTC will begin enforcement of the new Rule on June 1, 2010.

The Fair Trade Commission (FTC ), the federal bank regulatory agencies, and the National Credit Union Association jointly published the Identity Theft Red Flags regulations and guidelines (Red Flag Rule). The rule was promulgated pursuant to the Fair and Accurate Credit Transactions Act of 2003 (FACTA) and mandates that both financial institutions and creditors with covered accounts must have identity theft prevention programs to identify, detect, and respond to patterns, practices, or specific activities that could indicate identity theft. What distinguishes this rule from other rules relating to financial institutions (such as the Gramm-Leach-Bliley privacy rules), is that the Red Flag Rule applies to any firm that maintains an ongoing account through which a consumer is charged.

Federal Circuit Court of Appeals upheld a decision of District Court for the Eastern District of Virginia limiting United Technologies Corp.'s patent application to forward sweeping jet blade tips. At the same time the court overturned a decision by the Board of Patent Appeals and Interferences which prevented Rolls-Royce from using their patent application on a forward sweeping jet blade tip design.

On May 5, in a ruling handed down by Judge Rader for the Federal Circuit Court of Appeals, the Circuit court upheld the decision of the US District Court for the Eastern District of Virginia rendered by Judge Brinkema where the court held that United Technologies Corp.’s (UTC) patent only covered rear sweeping jet engine fan blade tips. The Court of Appeals held that because the district court correctly determined that Rolls-Royce, PLC’s (Rolls-Royce) forward sweeping blade tip patent would ‘not have been obvious’ in light of UTC’s application of their rear sweeping blade tip, the judgment of the District Court was proper. That decision can be found here.

Bankaholic.com offers consumers advice and information concerning bank rates and bank promotions through its blog and social networking features.  We would like to congratulate our client Johns Wu, founder of bankaholic.com, on this tremendous accomplishment.

If you have a legal matter arising on the web, contact one of Traverse Legal’s internet lawyers today.

Do you know what the licensing agreements your organization has signed say and mean?  If not, you are at risk for large fines and possibly even larger legal fees.  Organizations have been formed to identify companies that are not complying with licensing agreements, with software vendors for example.

So what can you do?  The first thing you should have done is an audit.
An audit is the first step and has been recommended by others dealing with software licensing matters.  Depending upon what the audit reveals, proper action can be taken to ensure compliance.

LOS ANGELES / Chatsworth, California: Metrolink is a commuter train agency in Los Angeles California which recently had the the unfortunate experience of having one if its engineers crash killing 25 victims and injuring over 100 other people.  Their spokesperson admitted that the train wreck was caused by human error. She later resigned, or was asked to resign, while Metrolink withdrew its admission of responsibility for the deadly train accident.  Within a short period of time, Metrolink had pulled its web site, replacing it and redirecting all pages to a single page "Emergency Alert" with a well crafted and terse message about the accident and train scheduling issues.  A search of archive.org reveals that Metrolink was shrewd enough to preclude archive indexing. It is impossible to see what information they 'had' on their web site about who they are, what they do and other biographical information. DomainTools keeps an image archive of the site, which is available here. Wouldn't you just love to know what information is contained in their "Safety" section which appears on their top navigation tabs? 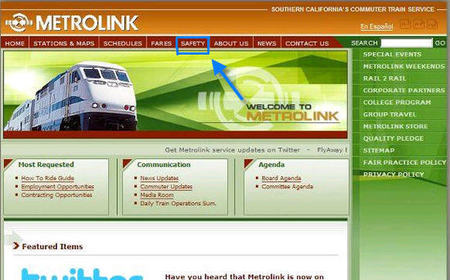 Google Will Delete IP Information From Search Log After 9 Months

Today, we're announcing a new logs retention policy: we'll anonymize IP addresses on our server logs after 9 months. Back in March 2007, Google became the first leading search engine to announce
a policy to anonymize our search server logs in the interests of
privacy. And many others in the industry quickly followed our lead.
Although that was good for privacy, it was a difficult decision because
the routine server log data we collect has always been a critical
ingredient of innovation. We have published a series of blog posts explaining how we use logs data for the benefit of our users: to make improvements to search quality, improve security, fight fraud and reduce spam.

CNN's Eunice Yoon reports on how China is cracking down on counterfeiters for the Olympic games.

China.  It’s often referred to as the factory of the world.  An economy built on the back of manufacturers. Just a 45-minute journey from Hong Kong, the port city of Shenzhen is a center for business and shopping.  It’s also a hub of illegal trade.

A lot of tourists know, just across the border from Hong Kong into China is a nexis point or a place to go to by counterfeits.

For years, luxury goods makers have hired private investigators like Ted Kavowras to try to end the production and sale of these bogus goods.  But the fight against fakes here has been a grueling uphill battle.  For the Beijing Olympics, we had heard Chinese authorities were cracking down on counterfeiters, carrying out more raids like this one.  So, we crossed the border to Shenzhen to see the situation for ourselves.  At first, it seemed, not much had changed.

This place is famous for its fakes, and it’s right across from the train station.  We had only been here for about 30 seconds before people started coming up to us to try to sell some of their bags.

But quickly, we found sellers had altered their tactics.  Instead of taking us to the mall, we were led to a nearby hotel, and inside one of the rooms, bags concealed and sold illegally in an effort to evade the police.  Later at the mall, we found other operators selling counterfeits, but storing them in secret chambers.  This vendor agreed to speak with us if we didn’t use his real name.  He told us to call him “Dee.”  Business is a bit harder now, he says, but we have hired people to follow the inspectors and tell us when they are coming.

So this is what we got.  This is a fake Prada bag.  This is a fake Louis Vuitton bag. This is actually supposed to be from the summer 2008 collection.  Take a look at the quality of it and the workmanship.  This Prada bag actually even comes with its own certificate of authenticity.

Catalogs like this one are in hand at stores like Dee’s, so buyers can order their own branded bags.  This issue is targeted at Olympic shoppers.  Buying fakes is not against the law here, but selling them is.  Dee says he is still willing to take the risk.  I have to make a living, he explains.  Protecting jobs and social stability have been priorities for the Chinese government.  That’s why some people argue authorities here have been slow to shut down illegal manufacturing by factories like the one shown in this video shot by private investigators.  Some international companies say Beijing should be doing more, and not just to save face in front of overseas guests.  Kavowras says he’ll take whatever help he can get:  “It’s a worldwide issue.  Customers from overseas, everywhere in the world are driving it.”

But perhaps not as many customers during the Olympics.

Online marketplace eBay Inc. says it plans to appeal a French ruling that the company must pay $63 million because counterfeit goods were sold through its site.

San Jose-based eBay (Nasdaq:EBAY) says it takes down counterfeits "swiftly" and added that the ruling by the Tribunal de Commerce in Paris, France, "is not about our fight against counterfeit; today's ruling is about an attempt by (the manufacturer) to protect uncompetitive commercial practices at the expense of consumer choice and the livelihood of law-abiding sellers that eBay empowers every day."

The court said eBay will be fined for every day that it doesn't stop advertising sales of the perfume brands.