Typo-squatting, the practice of registering domains using common misspellings of popular brands, products and people in order to profit from consumer typing errors, is increasing dramatically. McAfee recently did a comprensive study of typosquatting, as part of its effort to filter web traffic with its anti-virus and security system.  Read the McAfee Typo-Squatting Report here.

In an effort to further quantify and understand this phenomenon, McAfee studied 1.9 million typographical variations of 2,771 of the most popular and well known Web sites. Of these, we found 127,381 suspected typo-squatters.

Among McAfee’s key findings are the following:

Typo- and Cyber-squatting on the rise

Cybersquatting cases filed with the World Intellectual Property Organization’s (WIPO) arbitration system increased 20% in 2005 and another 25% in 2006. Microsoft says that “on an average day more than 2,000 domain names are registered that contain Microsoft trademark terms.” According to the US Government Accounting Office, at least 8.65% of all domain names are registered with false or incomplete Whois information, a practice that makes domain squatting easier.  More recently, in September 2007, the managers of the .eu top level domain suspended 10,000 domains registered by a Chinese woman who was accused of being a cyber-squatter.

The Economics of Typo-Squatting: Why it Works

Most commonly, typo-squatters make money by putting pay-per-click ads on their domains. The ads are typically generated by keywords related to the misspelled product. For iPhone typos, one might see ads for cell phone accessories, ring tones or calling plans. Profitable typo-squatting is built click by click, penny by penny. No single misspelled domain will generate enough profit to provide a living to the domain speculator. But a large portfolio of even slightly profitable domains can generate significant income. 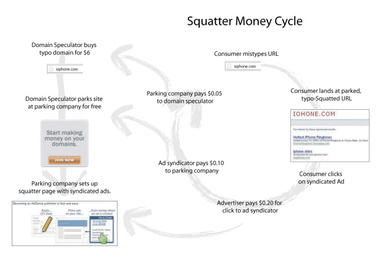 The domain speculator   buys two misspelled domains for $6 each.He registers the   two sites with a so-called Domain Monetization company – a parking   company that automates the process of serving advertising to those sites.After a 5 day “tasting   period,” he returns the less successful one for a full refund. The parking company   uses an automated advertising syndication service like Google AdSense   to serve ads to visitors who mistype the intended URL.Meanwhile, the true   domain’s owner has often contracted with Google to serve his ads on   what he hopes are appropriate sites.For every visitor   who clicks on one of those ads on the parked, misspelled page, the domain’s   owner pays the ad syndicator.  In our example, we’ll assume a   common cost per click rate of $0.20, but actual rates can become significantly   higher (several dollars or more per click) for specialty categories. The syndicator splits   this advertising revenue 50/50 with the parking company.The parking company   then splits his 50% with the domain speculator. Net: the domain   speculator earns $.05 (25% of the $.20 paid by the real domain’s owner)   for each click consumers make on the squatted domain. To break even on   his annual $6 investment, he needs 120 total clicks, or about one click   every three days.If he gets 1 click   per day, he makes $12.25 per year. If he grows his   portfolio to 1,000 sites, he makes $12,250. If he grows his   portfolio to 10,000 sites, he makes $122,500.
While it is often immediately obvious that a typo squatted domain is not the intended destination, some visitors still click on ads rather than navigate away from the typo site. In fact, the mere existence of the typo squatted domain is proof of this. If the site did not generate enough revenue to at least cover the cost of registering the domain, the squatter would abandon the site.

The economics of typo-squatting lead some analysts to describe this as a phenomenon of the long tail, the concept that the ease of Web navigation enables even the most rarefied content or product to earn some small amount of traffic and therefore, revenue. Professional domainers, including those who register typographic errors, often hold domain portfolios in the thousands or more.  Individual domains may return only a few dollars a month. But multiplied by the thousands, those few dollars can become significant.

Product development and brand building is at the heart of our economic system. Companies invest time and money into building their products and brands. By contrast, typo-squatters use automated tools to siphon potential customers and profit off the brands built by others. In our view, typo-squatting generates clear-cut winners and losers.

Ultimately, in our view, typo-squatters fail the added-value test. Parked typo sites filled with pay-per click ads don’t help the consumer find the site he was actually looking for. And they don’t help the company build and brand their product in the way they see fit.

Posted at 19:24 in Typosquatting & Cybersquatting of Domain Names | Permalink

Too bad the states have not tried to pass more stringent domain name dispute laws.

Yes, typosquatting has become rampant. And there is little doubt that typosquatters specifically target known trademarks. Their goal is specifically to divert traffic from other well known web sites and domains. It is typically easy to show bad faith domain registration. They discovered that many internet users use direct navigation to find web sites. That is, they enter a domain or brand directly into the address bar of the browser. When they get it wrong or enter a typographical error, they land on these infringing web sites. It is surprising how many web surfers use direct navigation and enter typographical errors into the browser adsress bar.

So, this is what it's called- typosquatting! Interesting, I came across one site doing this when I made a typo of the url of one of the most famous blogs on IM. They sure got tons of traffic doing these without even raising a finger!